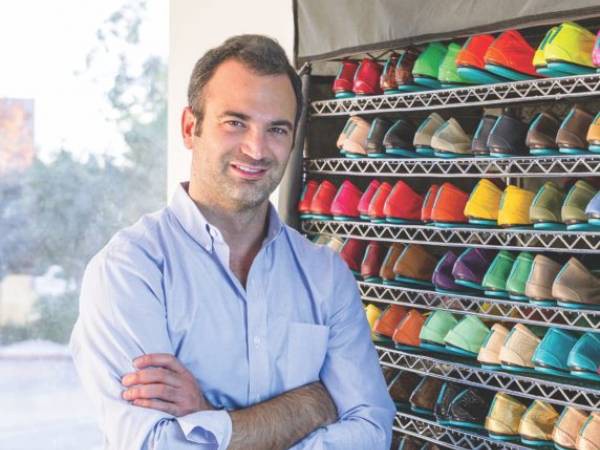 Many of today’s most interesting and successful entrepreneurs are those that are breaking ground in their industries, setting new goal posts, and reinventing the formula for how to do business. One such businessman is Kfir Gavrieli, CEO of Tieks, an American footwear brand, and director of the Gavrieli Foundation, through which Kfir supports community efforts at the grassroots level.

As the CEO of one of the most exciting retail brands currently gaining popularity on the Internet, Kfir is admired for his boldly simplified approach to doing business, and applauded for his philanthropic endeavors.

Who is Kfir Gavrieli?

Kfir Gavrieli is co-founder and CEO of Tieks, a brand of women’s casual footwear founded in 2008.  Tieks was a pioneer among fashion brands as one of the first to bypass brick and mortar stores and instead offer their products exclusively online through their own website. Based in Los Angeles, the Tieks brand enjoys a global customer fanbase and is growing steadily.

Gavrieli’s unfettered business model put Tieks on Forbes’ list of “25 Most Innovative Consumer Brands”, on Entrepreneur’s “Top 30 Startups to Watch” and on Oprah Magazine’s “O List.”.  Kfir was also included in Inc’s “30 Under 30” list, and the brand has caught the attention of various other renowned business publications.

Kfir is also committed to supporting the empowerment of women around the world, and achieves this through the philanthropic work of the Gavrieli Foundation. Since its inception, the Gavrieli Foundation has contributed over $10 million to support women entrepreneurs around the world through an online platform called Kiva.  Kiva provides microloans to small businesses and community efforts to improve living conditions in impoverished and underserved communities globally. The Gavrieli Foundation is currently the largest individual lender on the Kiva platform in the world and has helped to support hundreds of microloans for small community projects and small business startups.

In addition to his involvement with Kiva, Kfir has also been heavily involved with grassroots efforts to support essential health workers during the Covid-19 pandemic through an innovative marketing campaign called #SewTogether., which encouraged their followers and fanbase to “sew masks, save lives, and get Tieks,” as customers were rewarded for sewing and donating facemasks with discount coupons for flats.  The campaign produced and donated over 1 million masks to essential health workers in Los Angeles County and other areas.  Kfir was also influential in various other community support projects supporting health workers in the Los Angeles County area during the pandemic.

Kfir earned a Bachelor’s degree in Economics, as well as a Master’s in Materials Science & Engineering, from Stanford University, then went on to earn an MBA at the Stanford Graduate School of Business in 2008. He currently makes his home in Los Angeles, where his business is based, and where he is actively involved in community philanthropy by supporting various non-profit organizations.

Prior to co-founding Tieks, Kfir gained valuable business experience working in various financial sectors, including venture capital, hedge funds, real estate, and the tech industry. Having no prior experience in the fashion industry, he relied on his financial and technical skills to create the vision for Tieks.

Founded in 2008, Tieks launched its line of top-quality ballet flats. Tieks flats became an instant sensation, particularly due to their unique, patented split-sole design that allows them to fold in order to fit inside a purse or handbag.  Each pair of flats comes with a portable carrying bag. The quality and craftsmanship of the Tieks product also made waves, as the flats are made of fine Italian leather and high-end fabrics, including vegan options.  The shoes also provide superior comfort and durability, and are available in an abundant variety of styles that easily transition from work to play.

Tieks’ innovation in the unique design of its flats was matched by Kfir’s innovation in designing a simple business and marketing plan, making Tieks one of the very first retail brands to market its merchandise exclusively through its own website, long before online shopping became a widespread trend in the fashion industry. This model allowed the company to grow rapidly by circumventing the costs and burden of operating brick and mortar stores, establishing Tieks as a market leader early on.

Tieks flats became wildly popular once Oprah Winfrey endorsed them on her show, praising the shoes for their comfort, versatility, and sense of style, as well as the exceptional quality of the craftsmanship that goes into producing these unique and comfy shoes.  Tieks flats are available online at the Tieks.com website, at a price range between $175 and $345.

After 10 years of doing business, Tieks now has a vast global following of loyal customers, with the shoes gaining popularity thanks to their top-quality materials, excellent craftsmanship, and unique design. The brand’s fanbase is also inspired by the company’s commitment to community support and philanthropy, particularly for its role in supporting projects and small businesses headed by women.

Kfir Gavrieli is not married and has not revealed or shared any information regarding his personal life.

Kfir Gavrieli’s net worth is unknown.